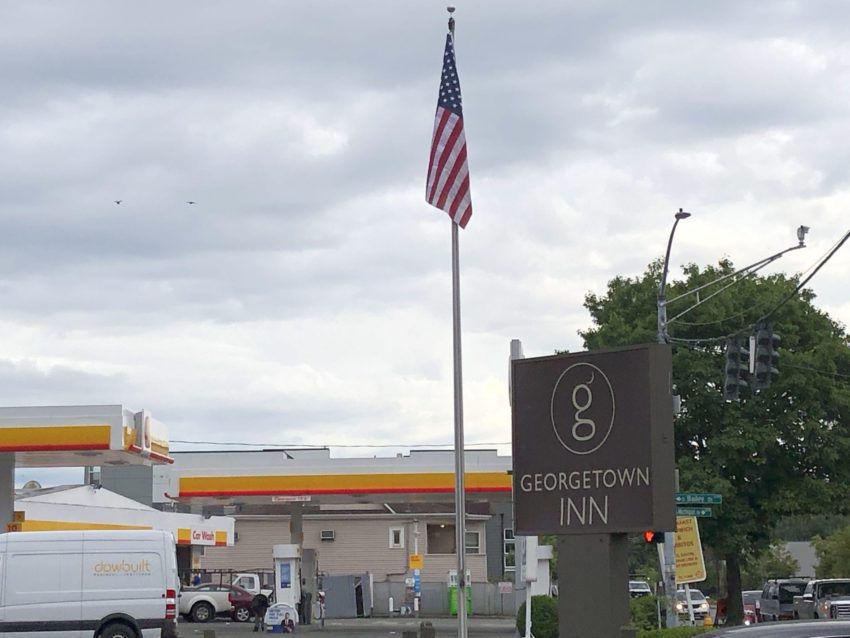 AGHOST investigated the Georgetown Inn (Seattle) on June 5, 2020. Inside, we discovered ghostly activity in a 3rd-floor room. Get the scoop after the jump.

AGHOST had the following investigators on site:

AGHOST began its walkthrough of the Georgetown Inn at 7:10 pm. The client guided us to the areas of the hotel with activity.

These areas and activity included:

When asked about deaths at the hotel, the client stated there had been people who died there since 1992, but there were no murders or other tragic events.

The hotel had also been in the family since it opened in 1992. They don’t know what was on the lot before the hotel was built.

Overall, the EMF readings and temperature were well within normal. The readings included:

While no activity was reported on the 3rd floor, AGHOST performed a baseline walkthrough and found odd EMF readings in the hallway by Room 323.

Inside, the team recorded shifting EMF patterns along the pillows and headboards on beds. The group then went to nearby rooms to test for similar patterns. The EMF pattern matched in neighboring rooms on the third floor, but not in the matching rooms on the second floor.

Later in the evening, Jake measured EMF behind the check-in desk. There were high readings from the modern electronics and appliances in the kitchenette behind it. The WiFi router along the front desk peaked at 71mG, and an espresso machine capped at 68mG. Other than that, the EMF readings were comparable to the appliances in the suites.

At this point, June Nixon and Ross Allison interviewed the clients while TammyLynn Ivy-Gelinas and Jake Rice went to the second floor to investigate.

To begin, TammyLynn and Jake placed a full-spectrum camera in the 2nd floor hallway where the client reported visual anomalies (no anomalies detected upon review). There was also a digital audio recorder placed in Room 226, where audio anomalies had been reported.

After setting up the recording equipment, TammyLynn & Jake began an EVP session. Most questions tried to capture an evidential response (something you can look up from the historical record to identify a spirit).

During the session, Jake heard something move a curtain that faced Corson Avenue (Shell gas station across the street). It sounded like a thump. TammyLynn tried to duplicate the sound and it was not the rod from the curtain. When she tapped the curtain, it sounded like the thump Jake heard.

Both investigators also heard some kind of static while in Room 226. The audio recorders didn’t detect anything other than the room’s ambient sound.

But during the EVP session, the 2 investigators heard footsteps above them in Room 326. At that point, Jake left to get a fob to enter the room and try to debunk it.

Approximately 5 minutes later, TammyLynn listened to Jake walk and jump in Room 326. The footsteps sounded most similar when Jake stood in a thinner area of carpet and kneaded his feet.

At this point, the investigators focused on Room 326.

More evidence was collected in this room. Over an hour-long session, TammyLynn and Jake captured the following:

There was a series where the evidence coalesced. At one point, the EMF meter spiked; the EDI+ captured pressure changes; Jake got tapped on his right shoulder; and, Jake heard the DVP. All 4 events happened within a 5-minute period. The video documents the activity at the beginning of this section.

UPDATE (June 6, 2020): Upon closer review, there is no recording of a woman saying ‘What?’. It appears to be an audio matrix. Here’s the audio:

After that, the activity started to slow down and EMF spikes became the most common phenomena. The K2 continued to spike when the investigator mentioned leaving or sitting on the couch.

About 45 minutes into the Room 326 investigation, June Nixon, Ross Allison and the client entered the room and remained for 15 minutes. At this time, AGHOST learned that Mrs. Kim, a long-time manager, passed away in 2013. She had lived on the property. At this point, we called the end of the session in Room 326 and went to the main lobby to test if there was any activity where Mrs. Kim had lived.

This session didn’t last as long as Room 326. AGHOST discovered that Mrs. Kim lived in an apartment-like area behind the front desk. Now, the area had been remodeled. Previously, it had a bedroom, kitchen and bathroom.

AGHOST didn’t capture any anomalies in the area at the time of this writing. The team briefly tried to mimic the music heard by the client, but nothing really matched the mid-tempo, ragtime piano music the clients witnessed.

At this point, the investigators continue to review their data for any evidence such as EVPs, apparitions or other ghostly activity.

After the initial investigation, AGHOST’s research team took at deeper look at the area and found this info.

It’s interesting to note what building sat across the street from the Georgetown Inn. It was the Morningside Tuberculosis Sanitorium (6001 Corson Avenue South).

The sanitorium was also known as the King County Tuberculosis Hospital (1928 – 1947). It originally opened as a ‘pest house’ in 1909. A pest house held people with highly contagious diseases like small pox and diphtheria.