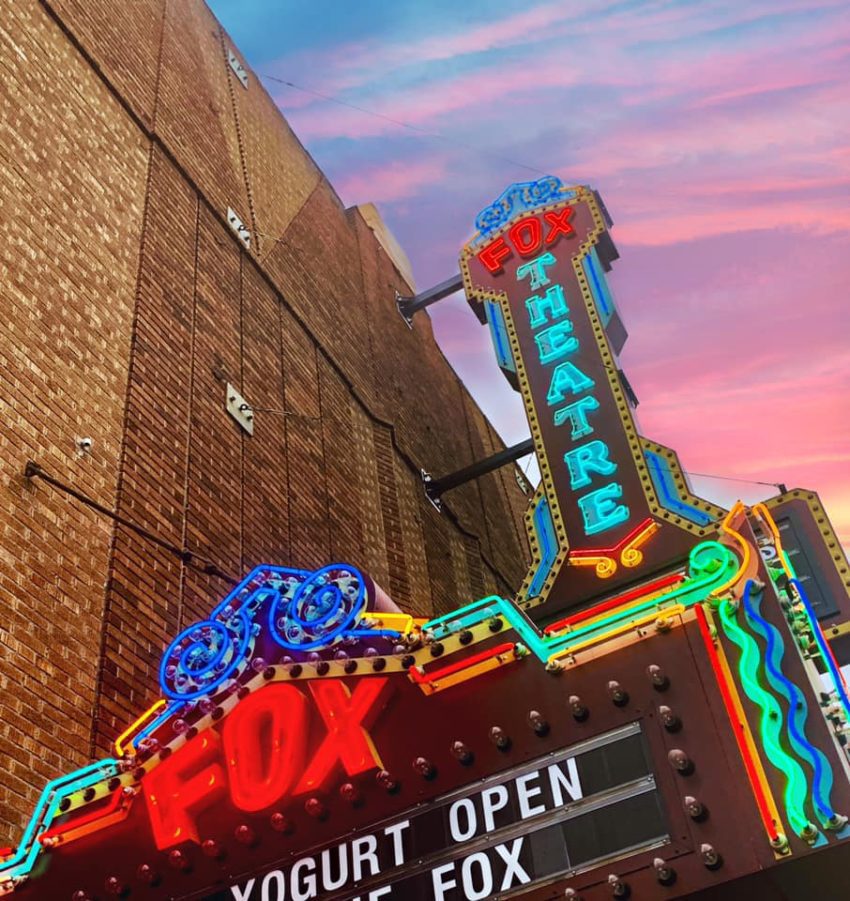 On September 14, 2019, AGHOST investigated the Fox Theatre in Centralia, Washington. Over the night, team members had personal experiences and we tested new gear. Get the scoop after the jump.

We received an excellent tour and haunting details from Conrad Lawrence, who oversees the renovation of the Fox Theatre. He provided its history as well as these ghostly encounters:

AGHOST took these notes to test for continued activity. Since the renovations started, the activity seems to have calmed down. The tour ended around 7:30 PM.

The buildings current state of renovation and size made this a challenging investigation. There were certain areas we had to avoid for safety like the projector room. We also had a lot of area to cover, so we leaned on a series of 7 infrared cameras to monitor the cavernous Fox Theatre.

The investigation began a little after 8 PM and wrapped at 1 AM.

We also split into 2 teams and moved to different parts of the building. You can read more about our ‘mini investigations’ below.

On the stage, we used June as a trigger object. She sang opera songs like performers of the past would do. Our goal was to see if we could get a ghostly response.

For the experiment, we placed an EMF array around her and aimed a SLS Kinect camera to capture a manifestation. There were no responses captured.

Later in the night, a group of investigators (June, Arch & Sandy) were to run experiments, but the events on the theatre’s main floor prevented them from going on stage. See the Theatre Floor mini investigation for those details.

There was an infrared camera placed mid-stage. We have yet to review the footage from it.

Ross, Morgan and Jake conducted an EVP session, accompanied by a SLS Kinect camera, live listening and a FLIR thermal imaging camera. Jake did not capture any apparitions, but Ross did collect 2 thermal anomalies. One appeared through a window pointing out to the orchestra pit. The other appeared along the wall by the orchestra pit.

We had 2 infrared cameras recording the area and have yet to review that evidence.

The mezzanine consists of the women’s bathroom, lobby and main office. We had a few environmental changes recorded on the EDI+ during an EVP session in the office. The REM pod placed here did not trigger at all. We did not capture anything in the women’s bathroom or lobby.

On the ground floor, you could access the theatre bowl, where all the seats would be. Investigators June, Sandy and Arch reported the following activity:

Later in the night, Jake and June went to the spot where the previous team had experiences. Jake reported the heebie-jeebies: His back tightened, his hair stood on end, and he had anxiety. June also had the heebie-jeebies. There was the sound of rubble moving, but it was debunked as wind hitting a temporary door.

Next, Morgan and Sandy went in, but didn’t capture any activity.

It was difficult to pinpoint the noises in the theatre bowl. Outside sounds as well as sounds from inside bounced around the interior. A storm passed through after 11 PM until the end of the investigation. The winds came through in spots, which added ‘noise’ to the sounds inside the building.

We had 2 infrared cameras placed in the far corners of the balcony and pointed down at the main floor and stage. Hopefully, we captured some of the anomalies the ladies’ team experienced. At this time, we have yet to review the video.

The projector room is currently under construction and not safe for people to enter. We placed 2 infrared cameras in the area to capture John Springer’s apparition. We have yet to review the footage from this placement.

AGHOST team members continue to review their data for possible ghostly evidence. I’ll update this post with what we find.

As for me, the most compelling evidence is the personal experiences on the theatre floor. My cameras didn’t capture apparitions or EVPs. So, watch this space for updates. There will be more evidence added as we sift through our recordings.