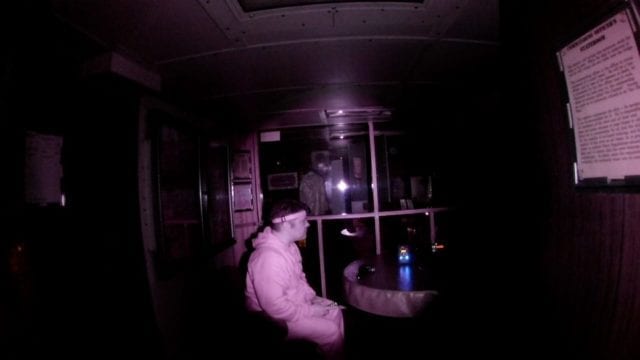 Ghostly Activities and AGHOST investigated the USS Turner Joy on June 9th, 2018 and captured ghostly interaction on this video. More after the jump.

Ghostly Activities and AGHOST captured ghostly engagement in the commander’s stateroom on the USS Turner Joy in Bremerton, Washington on June 9, 2018.

The session lasted 45 minutes (10:45 p.m. to 11:30 p.m.) with 5 credible engagements on the EDI geophone and EMF meter. We’ve shortened the video down to showcase the first engagement flare (before the transition) and then a more common—and longer—engagement (after the transition). The first part of the clip happened approximately 3 minutes into the video recording. The second part of the clip happened about 5 minutes later. This section of video occurred between 10:45 p.m. and 10:55 p.m. There was no change in temperature, nor any apparitions, collected in this room.

The engagements happened when we asked certain questions. The three topics with engagement included:

The EDI geophone and EMF flares also matched changes captured on our MEL meter (the red light to the right of the EDI). Each surge had different levels that rapidly cycled. In most of the engagements, the EMF ranged from 0.3mG to 8mG. The bursts were short and lasted approximately 5-8 seconds. As the session went on, the EMF flares became weaker. The last EMF flare ranged from 0.1mG to 1.3mG at 40 minutes in. Again, these flares happened based on the topic of the question mentioned earlier. They were not at consistent time intervals.

UPDATE (June 16, 2018): We captured 4 ghostly sounds. There were phantom footsteps and bangs recorded. In a couple of cases, we didn’t hear anything in real-time, but we did hear 2 events when they happened. These possible ghostly footsteps and bangs happened between 10:10 P.M. and 10:25 P.M. There was no one nearby us. The other AGHOST members were 3 or 4 floors below us at this time. Also, we didn’t see any EMF spikes. There was a gradual 3°F decrease in the bridge over a half-hour, but it’s likely a gradual drop in the temperature for night.

For our investigation, we used the following:

We’ll update this post with any more evidence we collect. This is Ghostly Activities’ second investigation aboard the USS Turner Joy. AGHOST often investigates the ship. You can find more details about their investigations at AGHOST.org.