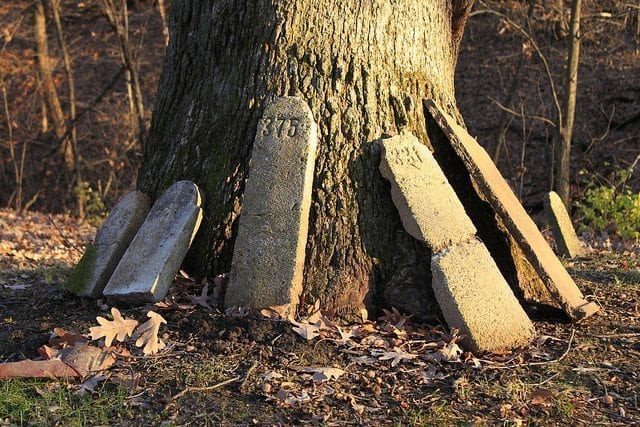 When we started ghost hunting, we trained in cemeteries. We didn’t know the kinds of graves and tombs. It’s a good idea to know the terms, so you can more easily navigate around the graveyard and find suspected haunted graves.

Here are pictures and descriptions of the most common graves and tombs in American cemeteries.

Headstones are placed at the head of the grave. It has the deceased’s name, birth date and date of death. You may also find epitaphs or a message from the family on it. Usually, the slab is made of granite, marble or another weather resistant stone. These are the most common grave markers in the United States.

More elaborate headstones are called tombstones. They may have sculpted angels, crosses or even gargoyles on them. Most people simply use gravestone now.

You can find crypts under churches, castles and monasteries. These are large chambers below the main floor of the buildings noted earlier. Large estates may have a family crypt in them. Usually, they’re made of the same material as the foundation of the building. They simply store the remains of priests, sisters or family members in its walls much like a mausoleum. West Minister Abbey, in London, is famous for its crypt.

A monument is a standalone statue or small building that commemorates a person, family or private group (like the fraternal order of the local police). They have a description of why the person or group has historic significance.

A mausoleum is a building built to be a memorial. It usually has a large interior with beautiful artwork and exterior work. Usually, a mausoleum is built by the very wealthy to commemorate a loved one, but it can hold the remains of an entire family.  The most famous mausoleum is the Taj Mahal in India.

Smaller mausoleums, for the less affluent, are also common in US cemeteries. They hold the cremated remains of family members due to its smaller size.

Usually, mausoleums are permanently sealed when they become full.

A tomb is nothing more than an enclosed chamber to hold the dead. They can come in many sizes, decorations and they can be above or below ground.

Chest tombs do not contain the remains of the deceased. They are usually long, box-like with an inscription about the deceased person. The body is buried in the ground below it. Chest tombs are not common in the United States.

A table tomb is built above the grave. It’s held on a series of pillars. You can find an inscription about the deceased. Table tombs protect the body from natural disasters, vandals and grave robbers. Table tombs were popular during colonial times.

A vault is an enclosure that holds a coffin. Ancient Egyptians use these quite a bit for their pharaohs. Vaults were intended to hold the remains of the deceased until their graves were dug. Now, cemeteries have burial vaults to hold the remains until the ground thaws.

One thought on “Different Types Of Graves & Tombs”