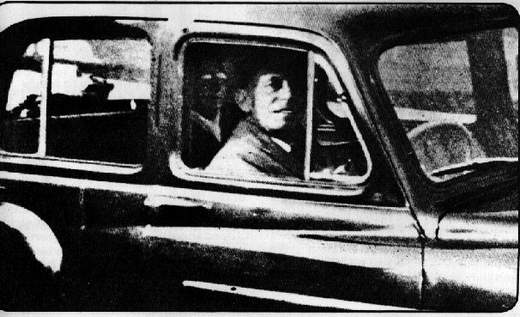 Ghostly Activities looked at 5 famous ghost pictures to debunk them or confirm them as real. Listed below are the pics, their history and our conclusion.

Bachelor’s Grove Cemetery has a long history of hauntings and ghostly activities. In 1991, the Ghost Research Society visited it to document its famous orbs and other apparitions. They used both infrared and standard cameras to record any sightings during the day. The cemetery was empty when  Judy Huff captured this picture on infrared film. (Note: Corrected on March 28, 2016, from Mari to Judy Huff, based on info from Dale Kaczmarek of Ghost Research Society)

Location: Checkered tombstone on south side of cemetery

It’s real. There’s no evidence to suggest tampering with the original film and the group had no reason to alter the negatives. The blurry face and feet would need multiple shots and the group only captured one picture of the ghost

A woman had visited her mother’s grave in Ipswich, England. She snapped a picture of her husband in their car to finish a roll of film. Once developed, she saw the ghostly image of her mother in the backseat.

It’s fake. We don’t think the woman altered her picture. It looks like a double exposure. The ghost-mother’s place in the backseat doesn’t match either – she’s too far forward. You can also see color distortion between the front of the car and the back. The front has darker gray dots and the back is clear. Reportedly, there is no tree where the photo took place.

The Brown Lady of Raynham Hall

Raynham Hall has a long history of apparitions. Photographers have captured many ghosts on film, but this spirit, The Brown Lady, is the most famous. Two reporters went to the hall to take some ghost pictures. At the end of their stay, the spirit manifested on the stairs in broad daylight and moved toward the crowd gathered below.

We believe it’s real, but there could be a natural explanation. The original negatives exist and many experts have reviewed them. Most of them agree the film is not altered. The witness accounts also verify the entity appeared. It also appeared during daylight.

If you look for a natural explanation, it may be sunlight creating an illusion. A sunbeam crosses the railings on both the left and right sides. The stairs show the light, too. It’s plausible for the 3 reflections to create a moving illusion – as the sun sets, it would move the illusion along the stairs.

An English pastor took this photo at his church in 1954. He and a friend decided to take a picture of the altar on their way out. When he developed the film, he saw the giant apparition next to the altar.

It’s fake. The clues are in its perfection. The spirit is well-defined with perfectly semi-transparent. Also, the scale is wrong. Human spirits keep their human characteristics. That means it would be the person’s height, weight and facial features. This spirit appears 7-ft. tall and it wears a hood. There’s no recorded history of anyone wearing a hood who was that tall.

Two girls walked around a newer section of Manila. They wanted to capture the moment, so they asked a stranger to take their picture using their phone. He snapped a few pictures and the girls discovered something in their pic.