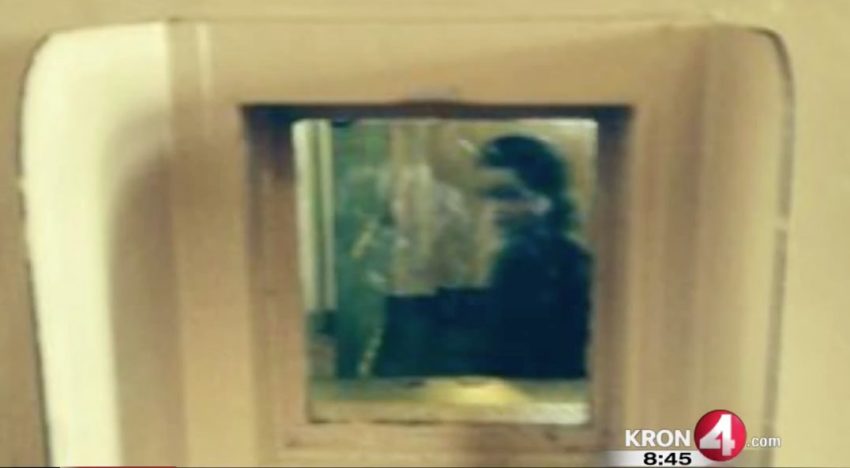 A British couple visited Alcatraz in San Francisco in mid-June. While on the tour, Sheila Sillery-Walsh snapped what appears to be a ghost. Let’s analyze the photo.

An amateur took the photo, so there isn’t a log of environmental conditions, and no ghost hunting equipment was on hand. The tourists took the self-guided audio tour. Sillery-Walsh simply took a picture at the visitation block.

We’ll need to make some assumptions about the conditions and camera settings.

The Bay Area is always cool and humid, but that shouldn’t be a factor in generating the image.

We have to assume the Sillery-Walsh used the auto-focus feature with an ISO lower than 400. Neither would create the ghost image. If the ISO were higher than 800, it might create a false ghost image because the shutter speed is left open longer, so it may capture someone in the background. We don’t know the aperture and shutter speed settings. We need to see the file’s metadata to know for sure. Under our assumptions, we can’t make a confident conclusion about the settings creating a false ghost image.

This is where we have our doubts about the picture.

First, it doesn’t look like this is a matrix. There’s nothing in the background that would trick your eyes.

Second, it looks like the fingerprints are missing from the ghost image. On the left, it’s easy to see the fingerprint smudges, but they’re not obvious in the second photo. If anything, the zoomed in right-side pic should make them more obvious.

Third, the lighting is also different. The last time we checked, ghosts don’t block out natural sunlight or fluorescent lighting. If the ghost did pull in the light’s energy, they would flicker and the tourists would notice it. There’s no sign that happened.

Fourth, the black background on the wall seems off, even when you change the angle slightly. It seems too close to the window. The same thing with the cell bars. They seem too close and too large compared to the picture on the left. The angle seems strange to us.

Fifth, there’s no record of any female ghosts at Alcatraz. Sure, the facility had a clinic with nurses, but none seem to haunt the halls. It looks like a high-quality apparition, but we can’t make out the hair style and clothing in this picture. If we had to guess, we’d place it around 1900. The facility would have been used as a military prison at that time and no women were on it.

We think it’s a fake, but we can’t be certain without the image file. There’s no evidence to support a female ghost at Alcatraz. We also see too many problems with the picture to consider it legit. If it is a ghost, it may have attached to Sheila Sillery-Walsh.